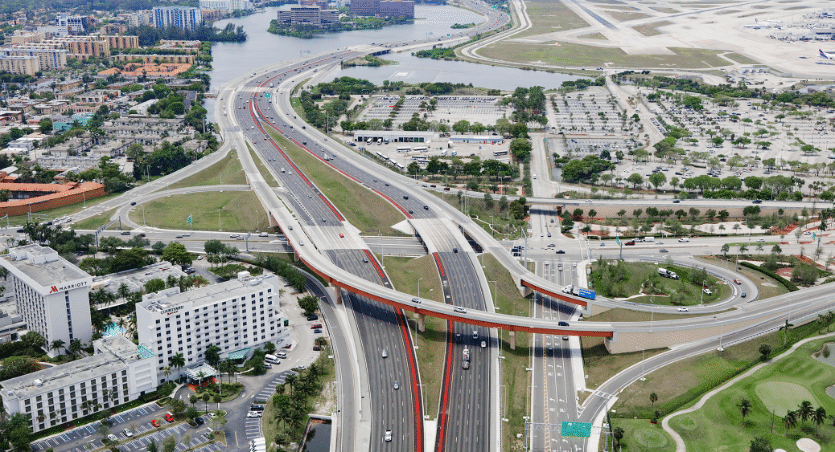 MDX is committed to fulfilling its mission of reinvesting your toll dollars in the expressway system. MDX has reinvested more than $1.5 billion in capacity, technology and safety improvements on all five expressways including: 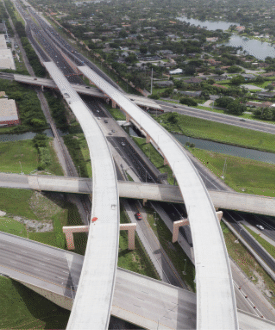 Construction is complete on the access ramp connection from the southern terminus of SR 874/Don Shula Expressway to SW 128th Street, including widening of SW 128th Street from two to four lanes, from SW 122nd Avenue to SW 137th Avenue. The SR 874 Expressway Ramp Connector provides alternative expressway access to the area, reducing congestion on SW 120th Street and SW 152nd Street by providing additional connectivity and mobility to the rapidly growing area of West Kendall and Southwest Miami-Dade County. 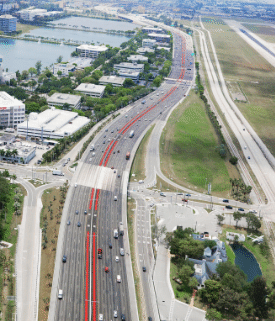 Construction of the improvements to the most congested segment of SR 836 from NW 57th Avenue to NW 27th Avenue was completed in 2020. The improvements include an additional lane in each direction, increasing capacity, and the reconstruction of the interchanges at NW 27th Avenue, NW 37th Avenue, NW 42nd Avenue, NW 45th Avenue and NW 57th Avenue. This reconstruction reduces congestion, and backups onto local roads. In an effort to seek, new and innovative traffic, management solutions a Diverging Diamond Interchange (DDI) was designed for the area at SR 836 and NW 57th and 27th Avenues. This significantly improves traffic efficiency and safety in the entrance and exits of the expressway. Perhaps the most important component of this project was the new right hand ramps that provide direct access to Miami International Airport and NW 42nd Avenue. In an effort to use our expressway for other modes of transportation, special red striped lanes on the reinforced inner shoulders provide exclusive access to Miami-Dade County’s Express Bus Service Dolphin Station Park and Ride to downtown. 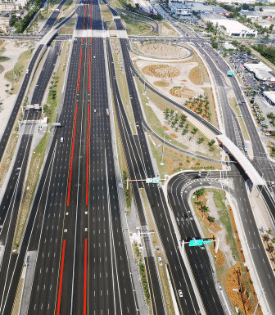 Construction of the SR 836/Dolphin Expressway Interchange Improvements at NW 87th Avenue in the Doral/Fontainebleau area was completed in 2020. The project completes system-to-system connections between SR 836 and the Palmetto Expressway and provides increased capacity to meet future traffic needs along SR 836. The main purpose of the project is to improve traffic operations and safety of the SR 836 and NW 87th Avenue Interchange by reconstructing the entrance and exit ramps and widening NW 12th Street between NW 87th and NW 82nd Avenues. A significant improvement is the addition of a new flyover entrance ramp that provides a direct connection from westbound NW 12th Street to westbound SR 836. The new entrance ramp substantially reduces congestion at the intersection of NW 87th Avenue and NW 12th Street. The project also included the construction of sound barriers, signing and pavement markings, lighting, drainage, utility coordination, Intelligent Transportation System (ITS) infrastructure and landscaping. The project also extended the Kitty Roedel Bike Path provided on the SR 836 right of way.

The Dolphin Station Park and Ride Transit Terminal Facility is open for service. This project is a partnership between MDX, Miami-Dade County Department of Transportation and Public Works (DTPW) and the Florida Department of Transportation (FDOT), District Six. The transit facility supports the Miami-Dade 836 Express Bus Service that runs from the Dolphin Station to downtown. It also provide a terminus or stop for several Miami-Dade County local bus routes serving the Dolphin Mall. Trolley service from the adjacent municipalities of Sweetwater and Doral can use this facility and a transit station.

In partnership with the Florida Department of Transportation (FDOT), MDX has contributed to the funding of the recently completed reconstruction of the SR 826/SR 836 Interchange. This project will lead to reduced travel time for drivers, direct connection to these roadways, installation of new technology, new bridges, beautification of the roadway and many more improvements. For more information please visit www.826-836.com

In the fall of 2011, construction began the final stretch of roadway on SR 874/Don Shula Expressway. When construction was completed in 2014 the mainline improvements from SW 88th Street/Kendall Drive to SR 826/Palmetto Expressway added capacity by adding an additional lane southbound and northbound from SR 826 to SW 88th Street. The project also included noise abatement walls along the corridor and enhancements that included landscape and hardscape.

Construction began on this project in the fall of 2008 and was completed in 2011. The project included capacity and safety improvements to SR 874/Don Shula Expressway mainline from SW 117th Avenue to SW 88th Street/Kendall Drive and the reconstruction of the Killian Parkway Interchange. The project also includes noise abatement walls along the corridor and enhancements including landscape and hardscape.

By the project’s completion in 2011, an extra travel lane was added in the eastbound direction of SR 836 from NW 57th Avenue/Red Road to NW 42nd Avenue/LeJeune Road. The new auxiliary lane improved traffic flow in the area by eliminating the bottleneck that occurred near NW 57th Avenue.

This innovative project was constructed to improve mobility at one of MDX's most congested areas on the SR 836/Dolphin Expressway eastbound from west of the SR 826/Palmetto Expressway to east of NW 72nd Avenue. With the project completed in 2008, the expressway shoulder was converted into an additional eastbound travel lane.

MDX delivered new mobility to west Miami-Dade County in 2008 by constructing a new section of SR 836/Dolphin Expressway that extends the popular expressway from Florida's Turnpike to NW 137th Avenue. The 3.1 mile, four-lane extension has provided drivers heading to and from the western suburbs of Miami-Dade County with a more direct connection to central Miami-Dade County.

This project was one of the first completed by MDX in the fall of 2000, and one of the first to be done as a design-build project. One auxiliary lane was added both eastbound and westbound from NW 107th Avenue to NW 87th Avenue. This improvement provided greater capacity and greater relief at the eastbound off ramp at NW 87th Avenue alleviating traffic congestion for motorists heading north to the West Dade employment center area. The project also added a triple access ramp as opposed to the then existing two lanes.

This project completed in the fall of 2000, added an auxiliary lane eastbound from NW 72nd Avenue ramp to NW 57th Avenue/Red Road. This project was constructed as a design-build project in order to expedite its delivery.

SR 924/Gratigny Parkway was a six-lane expressway except for a portion between the SR 826/Palmetto Expressway on the west and NW 57th Avenue/Red Road on the east. MDX improved this segment by widening it to the six-lane configuration throughout the expressway. This improvement addressed safety and operational efficiency, increased the level of service of the expressway and helped to relieve congestion and traffic bottlenecks. This project was completed in June 2001.

This was the first major project undertaken by MDX and it incorporated improvements of one mile of expressway from NW 27th Avenue to NW 17th Avenue and the reconstruction of the toll plaza at NW 17th Avenue. This project, completed in 2003, included the incorporation of SunPass® Express Lanes which allows commuters to go thru the plaza at highway speeds without having to stop or slow down. This was the first element of Open Road Tolling in an urban environment to open in Florida. It improved the capacity of the toll plaza processing capacity by approximately 40 percent, along with improvements to overall roadway geometry and safety.

MDX completed and opened in 2004, a new westbound exit ramp to Okeechobee Road to ease traffic on SR 112/Airport Expressway. It provided an additional auxiliary lane to Okeechobee Road increasing the overall capacity of the ramp and significantly reducing congestion in the area.

The purpose of the project, completed and opened to the public in 2005, was to provide better access to and from NW 107th Avenue from SR 836/Dolphin Expressway to provide improved connections to both the northbound and southbound Homestead Extension of Florida's Turnpike (HEFT) as well as to function as the mainframe in constructing an extension to SR 836.

This project, started March 2005, was opened to the public in 18 months and included the construction of one auxiliary lane, approximately 1.5 miles long, adjacent to the existing westbound SR 836/Dolphin Expressway from just west of NW 57th Avenue/Red Road to SR 826/Palmetto Expressway. This project was important in improving the gridlock and traffic back-ups on SR 836 between NW 57th Avenue and the SR 826 interchange.

This project was completed in 18 months and opened to the public in 2006. It extended and widened the existing fourth outside lane westbound from just east of NW 57th Avenue/Red Road to just west of NW 57th Avenue connecting to the ongoing improvements from this point to the SR 826/Palmetto Expressway. It also provided a new exit ramp to NW 57th Avenue southbound. This eliminated the condition where the outside fourth lane dropped at NW 57th Avenue in the westbound direction creating conflicts in traffic movements and unsafe conditions.